My Dealings With Feminist Frequency

Perhaps "my lack of dealings with Feminist Frequency" would be a better title, since getting into contact with either Anita Sarkeesian herself or any of the colleagues she works with on her video series is more difficult than performing brain surgery, but I think it's worth writing about my attempts to do so. It's probably more accurate to say that this blog post is about Anita's propensity to silence her critics not through rebuttals and counter-arguments but through stonewalling and dismissal.

Why is this so important to spotlight? Well, Anita has made a lot of self-congratulatory statements about how the abusive comments on her video "failed to silence her", such as at her TEDxWomen talk and on her blog. Let's put aside the fact that Anita faced an obligation from Kickstarter to continue with her project or she could've faced legal action according to the site's terms and conditions -- so she could've ended up on the receiving end of a lawsuit if she was "silenced" -- and focus on how Anita and/or her Feminist Frequency colleagues don't have any issue with silencing others.

There are a few problems with this; Anita's fans probably think it's petty of me to bring this up and are sure that Anita only silences people who send abusive messages in her direction. Anita's critics, meanwhile, have probably already seen that the comments on her Youtube videos have been disabled, so there's no point in writing about this. I'm preaching to the choir.

Well to Anita's fans, I promise I'm not pointing this out to be petty. There is a serious point to be made and I have proof that Anita does not only silence abusive messages. As for Anita's critics, I understand why you'd be skeptical but there's a lot more to Feminist Frequency's censorship than disabling Youtube comments, so maybe there'll be some new information you're unfamiliar with.

Let's start with that though; if you've been following Anita's videos at all, you'll know that she disables comments on her Youtube videos, ostensibly because she doesn't want to receive abusive comments. She does the same on feministfrequency.com too. 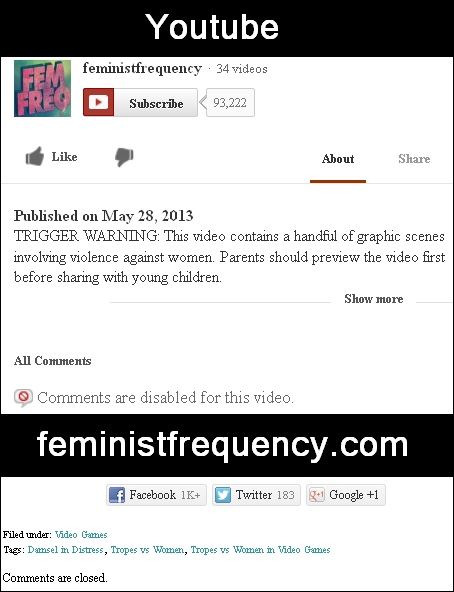 You probably already know about those two but that's just the start. There's a contact page on feministfrequency.com where, obviously, you can get in touch with Anita. In the middle of last year, before I started writing this blog, that's exactly what I did.

Since this was before I knew I'd be writing a blog like this, I didn't take any screenshots of my message to Anita (and because contacting Anita involves filling out a form, there isn't a record in my own "sent" folder). Basically, I wrote a message to Anita that was very respectful and asked if she would be interested in answering a few questions and I did make it clear that they would involve facing some of the criticism that had been sent in her direction. Also, because Anita specifies that members of the press and people who want to book her for lectures and workshops should say so in their messages, I wrote that I was interested in reading her answers to a few questions because I was hoping to get a job with my regional newspaper. At the time, that was true; my regional newspaper rarely updated its "Games & Technology" section, so I figured I'd be a good fit. As it turned out, neither they nor Anita responded to my e-mails, so it was all a moot point anyway.

As it stands now, nothing I've written above sounds like too big a deal; Anita is free to do what she likes with her videos and website, so disabling comments is her prerogative, isn't it? As for the e-mails, perhaps Anita's inbox was so clogged with messages that she never had a chance to read mine, or maybe she read it and wasn't interested, so she never sent a reply. She doesn't owe me a reply, after all.

The first time I noticed the comments on the Feminist Frequency page were open, it had just been updated with a link to an article on "Mansplaining" and I decided to stop by to voice my opinion. I was blocked after three comments. Once again, I'm sorry, but I didn't take any screenshots of my comments; it was only after this that I realised I should keep a record every time I was in contact with Feminist Frequency because it might not be there the next time I looked. Firstly, I asked if it was "mansplaining" to suggest that Anita answered the criticism that had been directed towards her. I received a reply saying that Anita didn't have to answer my criticism, to which I responded that I was actually referring to criticism from LeoPirate -- one of Anita's backers that left criticism of her on Youtube -- and not my own criticism. That was the first comment to be deleted and the person that responded to me deleted their own comment.

The third comment I left was in response to someone else, a male commenter called Nick -- his comment has since been deleted but I managed to find mine in my history -- who was full of praise for Anita but disagreed with the term "mansplaining". He felt like it was too confrontational. He would've preferred it if it was called something else, something more gender-neutral. Immediately, Nick was leapt on, he was called a mansplainer himself, I believe they questioned his right to have any say, since he was male and "mansplaining" was a term that described him perfectly according to the responses. I decided to come to his defence, with this:

"'Scuse me, Nick, I have to mansplain your response to the people below you ...

All Nick was doing was questioning if the word was helpful to the feminist movement. Are you really all jumping on him for not falling in line and pledging unquestioning allegiance to a word? That sounds closer to fascism than feminism."

I'll admit that my comments were a bit snarky but I thought it was on-point. This was the comment that ultimately got me blocked from the Feminist Frequency Facebook page. Nick replied to my comment before it was deleted and said thank you for understanding, which I was pleased about, and also made sure to repeat that he was a feminist. His comments were removed too before long and I haven't seen a comment of his since.

After this, I started keeping an eye out for any other comments that were likely to be removed but weren't abusive. I'm very happy to say that I found some. Spot the difference between these two screengrabs from Facebook. For the sake of privacy, I've blocked the identities of the people listed (blue for comments by men, pink for comments by women, purple if I wasn't sure): 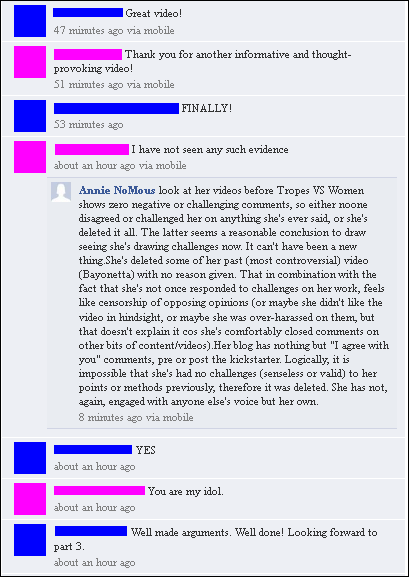 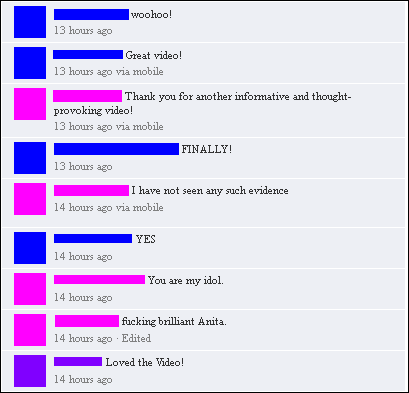 It seems like "Annie NoMous" is a pseudonym -- not only does it sound very close to "anonymous" but I checked this person's profile at the time and it was completely blank -- but still, I can't see any reason why their comment was deleted other than the fact that it dared to question Anita Sarkeesian. "Annie" isn't alone either. Take a look at this. The first picture was taken on the 27th of May and the second one was taken yesterday: 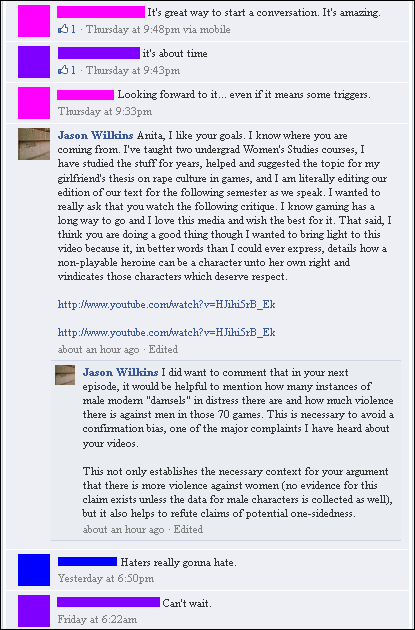 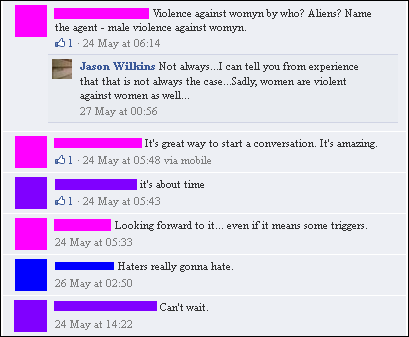 Jason Wilkins here is an interesting case because even though his original comment was deleted, he wasn't blocked from commenting on the Facebook page. Anita -- or, if not her, whoever runs the Feminist Frequency Facebook page -- took issue with the suggestion that the Tropes Vs Women videos could be improved by (shock! Horror!) pointing out violence against men in the games featured in the video series. Incidentally, if you're interested, the video he linked to in his comment (twice, accidentally) was KiteTales' rebuttal to Anita's second Damsels In Distress video.

Regardless of how you felt about the comment from "Annie NoMous", can you honestly say that Jason Wilkins' comments deserved to be deleted? He was nothing but courteous and showered Anita's goals with praise. However, because he pointed out that Anita could be doing a better job than she was -- and a more equal job at that -- his comments were quietly, unceremoniously deleted. So how does it work? If Anita is showered with praise, her critic gets off with a warning but if they outright oppose her, they're given the full Stalin-esque "unperson" treatment?

For all of Anita's boasts about abusive comments "failing to silence" her, she has no qualms about silencing others at the drop of a hat. It's about as hypocritical as it gets but it's also no secret why she does it; if it makes Anita look bad, it's getting deleted. Think about it:
Oh, and case you didn't know, Anita Sarkeesian's Wikipedia page is completely missing a "Criticism" section, unlike the vast majority of other public figures who analyse anything, not just popular culture. I'd also like to post the relevant part here, just on the off-chance that her page is updated with a Criticism section in the future but someone happens to read this blog afterwards.

As if all that wasn't enough, Anita has censored herself on occasions when she feels like she's made herself look bad; she removed her Bayonetta video from Youtube after she realised that her dumbing-down of the story, missing the point of the main character's sexualisation and clear lack of experience actually playing the game made her come off poorly. It seems to be a similar case with her university research paper, "I'll Make A Man Out Of You: Strong Women In Science Fiction And Fantasy Television", where her famous take on masculine and feminine traits came from. It was once hosted on feministfrequency.com but she has since removed it. Feel free to download it here!

You see, Feminist Frequency is built on censorship and silencing. It's very image-based, with Anita portraying herself as an almost-flawless central figure. On its own, without Anita's boasts about the abusive critics "failing to silence her", disabling Youtube comments and not answering e-mails seems fine. That's up to her to do. With those boasts, however, censoring perfectly polite and rational criticism is the most hypocritical thing Anita could've done. People telling others that Anita's aren't all cracked up to be? That's a failing on her part, sure, but it's one that can be fixed. Censoring the people who are bringing that up, after singing your own praises about failing to be silenced? Hypocrisy.

Let's finish with something fun. After I was blocked from Facebook, I took a screenshot of the comments section of the "mansplaining" article that Anita linked to and it's interesting to see the comments that made the cut when mine were deleted. If you thought the comment Jason Wilkins was replying to above was ridiculous -- I was astounded to find that someone out there actually uses the word "womyn" -- take a look at a selection of the others that made it. I'd post all of them but the picture would be far too big:

Yeah, criticising Anita is off-limits but "going crazy with a baseball bat" is welcomed under the Feminist Frequency banner. You should see some of the comments I had to cut.

As always, feel free to leave a comment below (you won't be silenced!) or send me an e-mail at themalesofgames@gmail.com (I ... might ignore that. I don't check it every day). 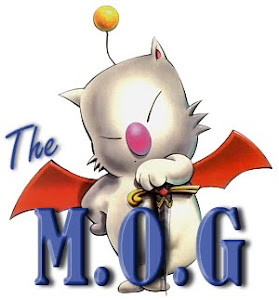